Building on over 100,000 procedures and nearly twenty years of experience gained from existing robotically navigated ablation catheters, MAGiC has been developed in collaboration with Osypka, a German medical devices company that pioneered the development of radiofrequency ablation of cardiac arrhythmias. MAGiC incorporates various features that are designed to enhance patient safety and efficacy, procedural efficiency, and the physician experience.

“The electrophysiology community has long awaited innovation in robotic catheter technology, and we are very excited by the near-term availability of the MAGiC catheter,” said Prof. , Cardiologist at Royal Brompton & Harefield Hospitals and Professor of Practice in Cardiology at . “I believe MAGiC will be a significant leap forward in clinical care for my patients and improved robotic performance.”

CE Mark submission of the MAGiC catheter reflects the culmination of an extensive design, development, manufacturing and testing effort. This catheter is the first in a series of interventional devices being developed by and serves as a platform for future innovations. anticipates making the MAGiC catheter commercially available for robotic electrophysiology practices in following receipt of CE Mark as early as year’s end. separately continues to work toward the submission of an application to the FDA to initiate a prospective IDE trial in .

“We are very pleased to reach this important milestone. This is a seminal event for as a company and for the physician community that is pioneering the frontiers of robotics in electrophysiology.” said , Chairman and CEO. “Our attention is focused on preparing for commercial launch of the catheter once we receive regulatory clearance. We look forward to the positive impact MAGiC can have on patients, physicians, providers and medical progress.”

About
is the global leader in innovative robotic technologies designed to enhance the treatment of arrhythmias and perform endovascular procedures. Its mission is the discovery, development and delivery of robotic systems, instruments, and information solutions for the interventional laboratory. These innovations help physicians provide unsurpassed patient care with robotic precision and safety, expand access to minimally invasive therapy, and enhance the productivity, connectivity, and intelligence in the operating room. technology has been used to treat over 100,000 patients across , , , and elsewhere. For more information, please visit www.stereotaxis.com.

This press release includes statements that may constitute "forward-looking" statements, usually containing the words "believe”, "estimate”, "project”, "expect" or similar expressions. Forward-looking statements inherently involve risks and uncertainties that could cause actual results to differ materially. Factors that would cause or contribute to such differences include, but are not limited to, the Company's ability to manage expenses at sustainable levels, acceptance of the Company's products in the marketplace, the effect of global economic conditions on the ability and willingness of customers to purchase its technology, competitive factors, changes resulting from healthcare policy, dependence upon third-party vendors, timing of regulatory approvals, the impact of pandemics or other disasters, and other risks discussed in the Company's periodic and other filings with the . By making these forward-looking statements, the Company undertakes no obligation to update these statements for revisions or changes after the date of this release. There can be no assurance that the Company will recognize revenue related to its purchase orders and other commitments because some of these purchase orders and other commitments are subject to contingencies that are outside of the Company's control and may be revised, modified, delayed, or canceled.

Photos accompanying this announcement are available at
https://www.globenewswire.com/NewsRoom/AttachmentNg/0601c262-27e0-4bed-a86e-36199cc54b55 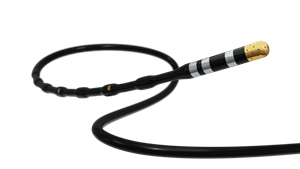 has announced CE Mark submission for its novel, robotically navigated MAGiC ablation catheter for the treatment of cardiac arrhythmias. Design features include a round, solid gold tip with 25 irrigation ports and string-of-pearls distribution of magnetic material along the catheter’s flexible shaft. 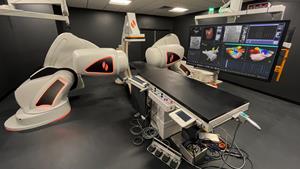 Procedure room equipped with Stereotaxis Robotic Magnetic Navigation (RMN) system for minimally invasive endovascular intervention. Robotic cardiac ablation is performed using a soft magnetic catheter navigated inside the heart by a physician seated at a computer cockpit. The physician navigates the catheter using precise, robotically actuated magnets positioned on either side of the patient.